Some notes from this meeting held in Leeds yesterday (18 September …)

A group of 14 academics, PhD students, and community musicians and organisers met in the third of four network meetings. HEIs represented include Leeds College of Music, Salford University, Sheffield University, UEA, Boston University, University of West of Scotland, RNCM, Goldsmiths. Community organisations include CME, Youth Music, Sound Sense, Lime/Music for Health, International Society for Music Education, as well as the freelance sector, and funding representatives. Several AHRC Connected Communities projects also were represented, from community music and participatory (cross-)arts, and questions were linked to some of these. 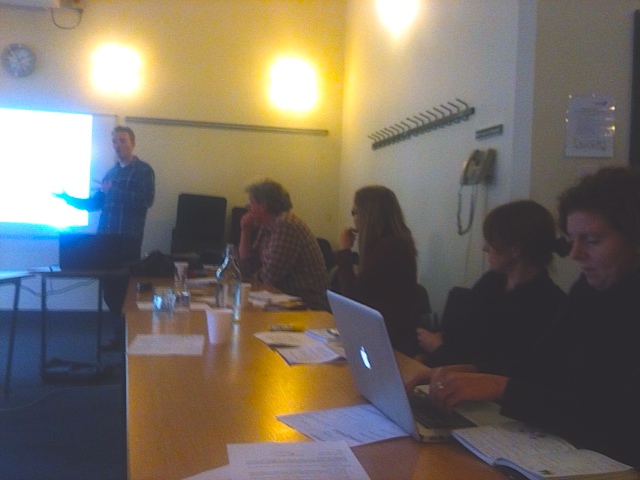 The network was funded under a highlight notice for Connected Communities, and the representation on this day really did feel like an emblematic CCP event, with the range of academics and partners. The network’s aims include how to:

The network has been partly a response to the sense of urgency within the austerity debate, as well as the emphasis on voluntary community organisations, the commercial language and focus on economic value over other forms of value. The network is set against a challenging backdrop of cuts in funding, and changing ideology around community arts, as well as a precariousness in career opportunities. It was reported that, in research for a recent related AHRC project, one Director of a CM project said that ‘we’ve probably seen the traditional [community] music sector die effectively’. While the soft outcomes of CM in the past have been impressive and valuable, the austerity agenda has driven towards ‘harder outputs’. These are the ‘harsh realities’ for contemporary (community / participatory) arts.

But the network is also about re-establishing and confirming or re-figuring the core values of CM, not losing them. Though is it a ‘tricky time’ to be revisiting or restating core values, when it seems in the effort for survival some organisations might be thought to be jettisoning them, with significant redundancies and shrinkage across CM organisations. And are they rather expensive values in a time of austerity? Or is it in times of crisis that we most need radical visions and sonicities? And anyway, aren’t community musicians by their nature radicals, especially if you look at the longstanding ones (the ones who didn’t do it for five years and then get QTS and go into school teaching, say).

Key to CM: ‘if you [funders, say] don’t like my values, well, here are some others’—and CM shouldn’t apologise for that, it is an indication of its capacity to be flexible and successful, and it’s because CM is focused always and inherently on what music does, and what music does is wide-ranging and deep.

Giving a voice, or rather listening to the voices communities already have, negotiation, empowerment … are these why CM does (and, if so, does it always do them)?