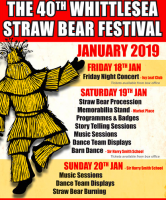 A rule of thumb when you arrive at an outdoor folk event and are unsure if you are heading in the right direction is to follow the sound of the drums. So it proved on Saturday when I visited Whittlesea for the 40th Straw Bear Festival. There were other telltale signs leading the way, such as the accidental tinkling of morris bells along the aisles of Boots pharmacy, and the smudges of paint that had ended up on the faces of those who had got too close to the molly dancers. Aside from these familiarities, however, I was a newcomer to Whittlesea and the Straw Bear.

Straw Bear in the main square

I was visiting the festival as part of the research I am conducting with Professor George McKay looking at street music in the UK. We are interested in the breadth and scope of the music performed publically across Britain, from parade bands to buskers, and we will be hosting a conference covering this topic in May 2019. The research is part of the Creative Spaces and Public Culture project at UEA, funded by the AHRC Connected Communities programme. I also filmed some of the street music and dancing, as you can see in this short video.

The Bear has been present in Whittlesea at the festivities on the Tuesday directly following Plough Monday since – as the programme states – ‘no one quite knows when’ (Straw Bear Festival, 2019) [this tongue-in-cheek attitude to tradition was echoed by the caller for the Witchmen Morris who introduced a dance as ‘written in 1806 by me’]. What is known from archival sources is that the Straw Bear was certainly on the streets from the late 19th Century and into the early 20th Century. A correspondent to Fenland Notes and Queries in 1899 noted that the:

[…] custom on Straw Bear Tuesday was for one of the confraternity of the plough to dress with straw one of their number as a bear and call him the Straw Bear. He was then taken round the village to entertain by his frantic and clumsy gestures the good folk who on the previous day had subscribed to the rustics’ spread of beer, tobacco, and beef, at which the Bear presided (FNQ: 228).

In Pagan Magic of the Northern Tradition, Nigel Pennick notes that although the police began to actively suppress the custom in 1907, a Straw Bear was still made even after World War 1 and ‘ran clandestinely from house to house avoiding police patrols’ (Pennick, 2015). The Straw Bear could also be found in other parts of the county. Over in Ramsey, in Huntingdon, the Bear was part of a spirit of ‘tolerated misrule’ at the festivities. Sybil Marshall, a local author, wrote in the Fenland Chronicle that:

It was the custom to settle personal scores on Plough Monday by playing practical jokes. This might involve ploughing up the garden or the front step, moving the water butt so it would flood the house when the front door would open, taking gates off their hinges and throwing them in the nearest dyke (Marshall 1967: 200-201).

The dancing out of Straw Bears in Whittlesea was revived in 1979 by the Whittlesea Society and Brian and Christine Kell, and now takes places over the course of a weekend near to Plough Monday and is organised by the Whittlesea Straw Bear Festival. The festival involves several processions of the main Straw Bear (and his smaller companions) around the town, along with music and a decorated plough, numerous dance sites for molly dancers, border morris, Cotswold morris, sword dancing, and Appalachian step, concerts, a mummers play, and a ceilidh.

plough in the procession

The procession is accompanied throughout by the Straw Bear Tune, ‘played slowly and with a lumbering beat’ (Straw Bear Festival, 2019) by a mixture of drums, accordions, mandolins, recorders, trombones and other assorted instruments. The dance spots dotted across the town meant that whichever side street I popped down I could usually hear either the musicians of the morris teams performing or catch a strain of the Straw Bear Tune. As with all good folk festivals, the music carried on  into the pubs as impromptu or scheduled tunes sessions.

The intergenerational aspect of the festivities, and the crafts and skills that get passed on between families and communities, were evident throughout. One of the first things I heard in the procession was a young lad of about 8 enthusing, ‘I’d love to be the Straw Bear!’ I also spied a mother praising her child (who was one of the little bears) and positing a drinking straw into the mouth of the costume to the small soul inside. My neighbours for most of the procession were a girl of about 5 playing the melodeon, and a man of around 60 playing a recorder.

The festival is visually engaging

The festival is visually engaging. Alongside the colourful, patched garbs of Park Lane Molly (comprised of Year 5 students from Park Lane School), the painted faces of the Bourne Borders Morris side, and the vegetable festooned plough, there was the Bear itself. The appearance of the Straw Bear has been remarked upon as weird, otherworldly, and pagan (Hutchings, 1976). It is certainly a distinctive design and not entirely what one might think of when picturing a bear. The programme provides the following account of how the Bear looked prior to the revival:

The Bear was described as having great lengths of tightly twisted straw bands prepared and wound up the arms, legs and body of the man or boy who was unfortunate enough to have been chosen. Two sticks fastened to his shoulders met a point over his head and the straw wound round upon them to form a cone above the “Bear’s” head. The face was quite covered and he could hardly see. A tail was provided and a strong chain fastened around the armpits (Straw Bear Festival, 2019).

The design is much less constricting for the modern day Bear, but the overall effect is not lessened as a result. Historically the straw was selected each year from the best available, with the harvesters saying, ‘that’ll do for the Bear’ (Straw Bear, 2019). It seems the same care is still taken and I’d grown quite attached to the Straw Bear by the end of the day and was happy not to be at the next day’s burning of the costume.

Among the music, the dancing, and the straw, it was great to see people out and about, enjoying themselves and their town, on a grey January day. I hope the Straw Bear continues to bring the community of Whittlesea out onto to streets for many more years to come.

Photography and filming by Elizabeth Bennett, 2019, except where stated.