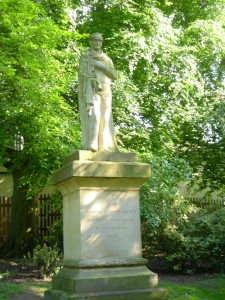 Working with Friends Groups, Local History Groups and other volunteers, the project is investigating the development of Nottingham’s Arboretum, Forest Recreation Ground, Church and General Cemeteries, several public walks and other green spaces created following the 1845 Enclosure Act. Topics being researched include changing planting scheme, how the space has been used over time, and the effect of later urban development proposals, many of which were successfully opposed by local community members.