Whose Remembrance? A scoping study of the available research on ex-colonial communities and the experience of two world wars 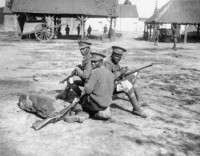 Whose Remembrance? sought to investigate the state of research into the experiences of the peoples of Britain’s former empire in the two world wars, and the understanding and availability of this research to audiences and communities today. The project was carried out by the IWM Research team in consultation with an advisory group of academics and specialists. Researchers worked on the production of three databases: published works produced by academics and community historians over the last thirty years; exhibitions and resources developed by museums and cultural organisations, and cultural outputs such as films, documentaries, novels and plays. Two workshops were held at IWM London, the first with historians and the second with museum professionals and, community workers and representatives. The team also included three specialist researchers who assessed the accessibility and usefulness of IWM collections for understanding and interpreting historical topics which they chose. A specially commissioned film summarised the study’s findings, which was made available on YouTube and has been shown at numerous public dissemination events across the UK. Additionally, an online guide has been developed for communities wishing to research colonial involvement in the First World War, which will be published on the IWM website in July 2014.